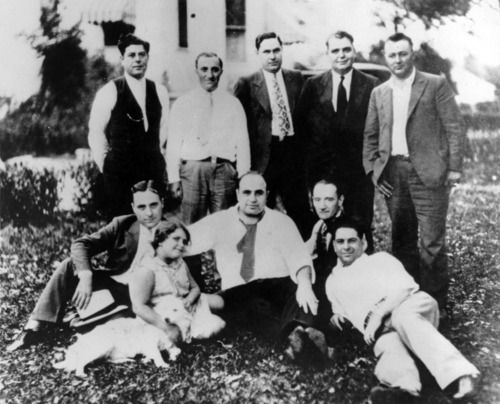 I have always been attracted to stories about the Mob. We have a farm in Southern Illinois and, down there for summers as a kid,  I heard first hand accounts about men like “Black Charley,” the Birger and Shelton gangs, and Old Shawneetown’s Helen Holbrook. Friends pointed out the roadhouses used for bootlegging, prostitution, and notoriously poor behaviors. These tales were the stuff of local fascination. Even respectable townspeople discussed them, awe mixed with a hint of local pride.

I live near Chicago Heights, a south suburb of Chicago with extensive Mob connections. Big Al’s aunt lived in “Da Heights,”(as it is known here) and Al Capone was no stranger to the town in the 20’s and 30’s. The head of the local Teamsters told me about the soup kitchen Mr. Capone set up during the Depression and he showed me the house where Big Al would throw nickels from the balcony to the kids gathered below. He was one of those kids catching coin. Regardless of murders and mayhem, illegal activities, and wicked deeds, Big Al holds a fond place in my heart. Like New Yorkers’ soft spot for Gotti, many Chicagoans enjoy the notoriety Big Al brought, and brings, to our town.

In my high school, a Catholic school in Da Heights, many of my peers were Mob kids. The President of our Senior Class was a kid who wore starched shirts, black trousers, and a silk tie to school, in an age of madras and Beatle haircuts. He even wore a diamond pinkie ring. In high school. He  is now living out west, and doing well I hear, under the auspices of the Witness Protection Program. Another kid’s dad was a local lawyer for the Mob, found shot execution style in the trunk of his Lincoln.

Lately my allure for the Mob has surfaced because I am binge watching Lilyhammer, a Netflix series about an American mobster in Norway, played brilliantly by Steven Van Zandt.  My husband does not hold with my attraction at all. He grimaces slightly when I show him my extensive brick collection from dismantled locales in Illinois where legendary Mob misdeeds occurred.

Easily influenced, I think I need to temper my enthusiasm, somewhat.  Last night in bed, after I had watched a couple of episodes of Lilyhammer on my iPad, my husband came in to update me on the current winter storm warnings.

Hub: Hon, Skilling just said we may get up to 12 inches of the white stuff tomorrow.

Thoughts on a changing profession and life

Thinking with and about Photographs

Art Can Make a Difference

A former carny kid casts an insider's eye on the amusement business, Coney Island, and fun places in between

photography, writing and the spaces between

Send your queries at thekathmandudes@gmail.com

David duChemin is a photographer, author, and nomad. These are his photographs, words, and adventures. Welcome.